You are here: Home / Being Catholic / Catholic Saints Books for January

Ready to celebrate the Holy Days and feast days coming up in January? This list of books, arranged in calendar order, will help you to be prepared to live the liturgical year at home with your family! 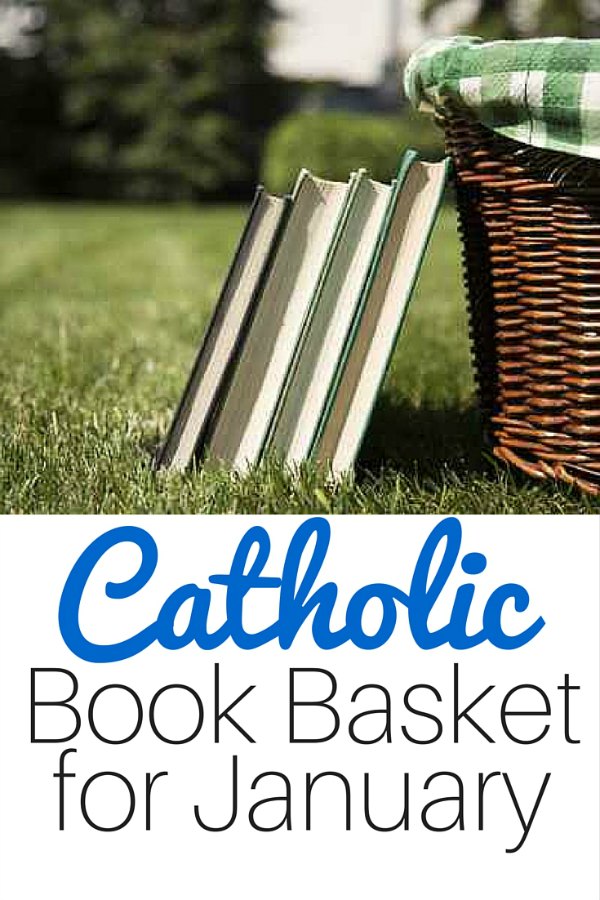 The Solemnity of the Blessed Virgin Mary – January 1st

Before you stay out too late on New Year’s Eve, don’t forget that January 1st is a Holy Day. We celebrate Our Lady on the first day of the year as the Holy Mother of God.

Add these books to your stash, or request them from your local library.

Mondays With Mary by Meredith Henning
Mother of God Coloring Book
Mary
Mary: Mother of Jesus
You can find a study guide in Catholic Mosaic.
Take it to the Queen: A Tale of Hope
Saints and Angels

St Basil – January 2nd
St Basil the Great is one of the Doctors of the Church, and patron saint of hospital administrators.

St. Genevieve – January 3rd
Patroness of Paris, St Genevieve’s symbol is a loaf of bread – a reminder of how generous she was to the poor.

Saints: Lives and Illuminations
Once Upon a Time Saints
Saints for Girls
The Golden Legend of Young Saints

A convert to the Catholic faith, Mother Seton established the first free Catholic school in America. She’s a saint I turn to frequently for help in my homeschool.

Around the Year Once Upon a Time Saints
Lives of the Saints: An Illustrated History for Children
More Saints: Lives and Illuminations
An Alphabet of Catholic Saints
Mother Seton and the Sisters of Charity
A Story of Mother Elizabeth Seton
Kat Finds a Friend: A St. Elizabeth Ann Seton Story

This Redemptorist priest could speak six languages, and played a vital role in the advancement of American Catholic education. As bishop, he was the first to organize a diocesan Catholic school system.

Around the Year Once Upon a Time Saints
Lives of the Saints: An Illustrated History for Children
Thomas finds a Treasure: A St. John Neumann Story

Celebrating the Twelve Days of Christmas (up until Epiphany)

Don’t take down your Christmas tree! As Catholics, we celebrate the season of Christmas, right up through the feast of Epiphany.

St Andre Bessette – January 6th
This saint had a giant devotion to St Joseph, along with a quiet determination in spite of physical obstacles. He is the patron saint of family caregivers in Canada.

The Epiphany is one of my very favorite feast days of the year. Contemplating the Wise Men’s journey and defiance of King Herod is exciting, and it coincides so well with the beginning of a new year. We bless our homes and have King Cake Cupcakes for dessert, discussing what sort of treasures we can bring to Jesus ourselves.

These Epiphany activities will keep your children busy all weekend – don’t miss them!

St Felix of Nola was the son of a Roman soldier and an assistant to Bishop St Maximus of Nola. He was imprisoned during the Christian persecutions and was rescued by an angel. He spent the rest of his life in hiding, working tirelessly to aid the poor.

Saint Felix and the Spider

St. Paul – The First Hermit – January 15th
Paul of Thebes, commonly known as Paul, the First Hermit or Paul the Anchorite is regarded as the first Christian hermit.

The Book of Saints & Heroes

St Anthony the Abbot (St Anthony of Egypt), was an Egyptian hermit who was sought out by wise men from as far away as Greece for guidance.

Saints: Lives and Illuminations
The Book of Saints & Heroes

St Sebastian was a captain in the Praetorian Guard. He was sentenced to death by bow and arrow for being a Christian. His persecutors left him for dead. He healed, but was martyred by the emperor. He is known as the patron of athletes.

Saints and Angels
Lives of the Saints: An Illustrated History for Children
An Alphabet of Saints

Our Lady of Altagracia – January 21st

A Gift of Gracias: The Legend of Altagracia

Lives of the Saints: An Illustrated History for Children
More Saints: Lives and Illuminations

St. Paul,a Roman citizen and a Pharisee, was originally known as Saul. He even presided over the persecutions of the early Christians and was present at the martyrdom of St. Stephen.

However, Saul experienced a powerful vision that caused him to convert to Christianity while on the road to Damascus. He was duly baptized and took the name Paul.

Lives and Legends of Saints
Saints and Angels
The Great Hero: St. Paul the Apostle
Adventures of St. Paul
St. Paul The Apostle
The First Christians: The Acts of the Apostles for Children
Golden Legend of Young Saints

St. Paula – January 26th
After St Paula’s husband died, she became St Jerome’s closest confidante and assistant, taking care of him and helping him in his biblical work. She is the patroness of widows.

St. Angela Merici – January 27th
Although it was never a religious order in her lifetime, Angela’s Company of Saint Ursula, or the Ursulines, was the first group of women religious to work outside the cloister and the first teaching order of women.

St. Thomas Aquinas – January 28th
St Thomas Aquinas surpassed all of his fellow students in learning and virtue. He studied under St Albert the Great, began teaching at age 22, and at age 31 received his doctorate. He is a Doctor of the Church as well as the patron of universities and students.

St John Bosco – January 31st
Saint John Bosco, popularly known as Don Bosco, was an Italian Roman Catholic priest, educator and writer of the 19th century. While working in Turin, where the population suffered many of the effects of industrialization and urbanization, he dedicated his life to the betterment and education of street children, juvenile delinquents, and other disadvantaged youth.

What are your favorite Catholic saints books that you read in January?