You are here: Home / Being Catholic / Saints and Scripture Sunday: St Anthony of Padua

1 Timothy 4:13
Until I arrive, give attention to the public reading of scripture, to exhorting, to teaching.

For a long time, that’s all I knew about Saint Anthony of Padua …. better known as finder of lost articles. 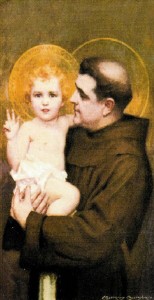 While reading A Book of Saints for Catholic Moms – I happened across the entry for St Anthony. I soon learned that there was much more beneath the “Help me find this!” prayer I recite at least once a week.

St Anthony was born in Portugal during the late 1100s, and aspired to be a Franciscan priest, hoping for martyrdom. His family was wealthy, and had hopes of him becoming a nobleman. Instead, St Anthony gave up his comfortable background to lead others to Christ.

He planned to go to Morocco to minister to Muslims in that area. Along the way, his ship was blown off course, and was shipwrecked in Sicily. He joined other Franciscan brothers there. After being asked to fill in when a scheduled speaker failed to appear, St Anthony used his gift of knowledge of Sacred Scripture, teaching, and evangelizing throughout Italy and France. He was able to instruct even the most uneducated peasants about the Gospel, and became known as the Hammer of the Heretics.

He died at age 36, and was named a Saint within a year’s time. He is invoked as the patron saint of travelers, expectant mothers, sailors and more.

Looking for ways to celebrate this beloved saint’s feast day? (June 13th) Drop a little extra in your parish’s Poor Box, following St Anthony’s lead of giving to the poor and oppressed. You could bake St Anthony’s Bread, and deliver to your favorite priest, or donate to a food bank. In the Kennedy house, I’m finishing up a novena to St Anthony.

How are you choosing to live like St Anthony this week? Giving to the poor? Teaching others the Faith? Be sure and share your thoughts below.