You are here: Home / Being Catholic / The Often Overlooked Joseph:Saints and Scripture Sunday

EVERYONE knows that March 17th is Saint Patrick’s day, right down to the little Kennedys. Although I love St Patrick (after all, one of my children carries his name), I have more of an affinity for another saint who has a feast day this week.

March 19th is the feast day of Saint Joseph. A direct descendant of King David; he was well versed in the Jewish law of the time. Upon discovering that Mary was pregnant, he planned to divorce her quietly, but was concerned for her safety — she would have surely been stoned. He was visited by an angel during a dream, and was told the truth about the child that Mary was carrying — that he was the Son of God. Without question, Joseph accepted his role as husband to the mother of Our Lord, and earthly father to the baby Jesus. 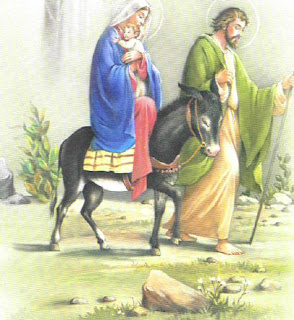 Later, when again visited by an angel who warned him of Herod’s murderous plans, Joseph packed up his family and headed to Egypt for safety. This is one of my favorite stories about Joseph and Mary — I can empathize with Mary, being exhausted post-partum, and can’t imagine having to flee to a strange, foreign land.


Now after they had left , an angel of the Lord appeared to Joseph in a dream and said, “get up, take the child and his mother and flee to Egypt, and remain there until I tell you; for Herod is about to search for the child, to destroy him. Then Joesph got up, took the child and his mother by night, and went to Egypt, and remained there until the death of Herod. This was to fulfill what had been spoken by the Lord through the prophet, “Out of Egypt I have called my son”

Saint Joseph is the patron saint of the Universal Church, carpenters, fathers, and social justice. I know that my own husband holds him very dear to his heart, as a shining example of a husband and father. Joseph put his family above all, worked hard to provide for them, and followed God’s law without question.

We’re halfway through Lent: How are your plans shaping up? I have to admit, my lofty goals have been pretty unsuccessful thus far — I’m planning on regrouping and refocusing this week.

Join in the fun, and have a marvelous week!