You are here: Home / Being Catholic / Happy Easter! Saints and Scripture Sunday

What a wonderful and Blessed Easter Sunday! It’s beautiful here in Kentucky, and sad to say, I will be at work, while the Kennedy Kaboodle visits family. 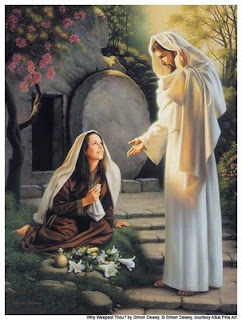 I love this picture, but there were two women at the tomb!

After the sabbath, as the first day of the week was dawning, Mary Magdalene and the other Mary went to see the tomb. And suddenly there was a great earthquake; for an angel of the Lord, descending from heaven, came and rolled back the stone and sat on it. His appearance was like lightning, and his clothing white as snow. For fear of him the guards shook and became like dead men. But the angel said to the women, “Do not be afraid; I know that you are looking for Jesus who was crucified. He is not here; for he has been raised, as he said. Come, see the place where he lay. Then go quickly and tell his disciples, ‘He has been raised from the dead, and indeed he is going ahead of you to Galilee; there you will see him.’ This is my message for you.” So they left the tomb quickly with fear and great joy, and ran to tell his disciples. Suddenly Jesus met them and said, “Greetings!” And they came to him, took hold of his feet, and worshiped him. Then Jesus said to them, “Do not be afraid; go and tell my brothers to go to Galilee; there they will see me.”


I can’t even begin to imagine the myriad of emotions experienced by Our Blessed Mother and Mary Magdalene that morning: Sadness, visiting the tomb; fear — can you picture an earthquake, and suddenly there’s an angel in front of you? Disbelief — I’ve named one of my children aptly, since I am (and would have been back then as well) a Doubting Thomas; and pure elation, at the news that Jesus has risen.

Saint spotlight of the day? Mary Magdalene, of course. Not without controversy, as well as conflicting stories and opinions, her story touches me. She was not the most popular choices among the followers of Jesus, but one who stayed true, even after his death and Resurrection. I’ve read that she helped care for Mary as well, after the Ascension.

I know this is a completely secular portrayal of her, but this song has been on my mind all week, and it’s one of my favorites. She’s determined to take care of Our Lord, to ease his mind, and even being chided by Judas isn’t going to stop her. It certainly isn’t written in the Scriptures like this, but I can imagine a scene like this taking place.

Join in, link up, and enjoy this wonderful Easter season!