You are here: Home / Being Catholic / Divine Mercy Sunday: Saints and Scripture Sunday 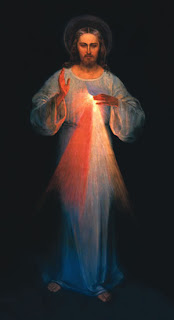 Every Catholic knows this image, and I’ll bet a lot of you may have grown up with this image in your homes. This is known as the Image of Divine Mercy,  given to Saint Maria Faustina

in the 1930s. The Image represents the outpouring of the graces of Divine Mercy upon the world, especially in the sacraments of Baptism and the Eucharist. There’s even a Divine Mercy Novena, which started on Good Friday, and ends today.

Saint Faustina was a poor, uneducated Polish nun, limited to simple kitchen or garden tasks within her convent. She received visitations from Our Lord, and was instructed to record these messages. Her diaries are one of the most widely read Catholic literature today. (it’s on my ‘to be read’ list!)

One of the most beautiful prayers we have as Catholics is the Divine Mercy Chaplet. For me, it’s incredibly soothing, and I love to hear it in song.

Today’s scripture I lifted straight from today’s Mass reading of the Gospel – John 20:19-31

On the evening of that first day of the week,when the doors were locked, where the disciples were, for fear of theJews, Jesus came and stood in their midst and said to them, “Peace bewith you.” When he had said this, he showed them his hands and his side. The disciples rejoiced when they saw the Lord. (Jesus) said to them again, “Peace be with you. As the Father has sent me, so I send you.” And when he had said this, he breathed on them and said to them, “Receive the holy Spirit. Whose sins you forgive are forgiven them, and whose sins you retain are retained.”
Thomas, called Didymus, one of the Twelve, was not with them when Jesus came.
So the other disciples said to him, “We have seen the Lord.” But hesaid to them, “Unless I see the mark of the nails in his hands and putmy finger into the nailmarks and put my hand into his side, I will notbelieve.”
Now a week laterhis disciples were again inside and Thomas was with them. Jesus came,although the doors were locked, and stood in their midst and said,”Peace be with you.”
Thenhe said to Thomas, “Put your finger here and see my hands, and bringyour hand and put it into my side, and do not be unbelieving, butbelieve.”
Thomas answered and said to him, “My Lord and my God!”
Jesus said to him, “Have you come to believe because you have seen me? Blessed are those who have not seen and have believed.”
Now Jesus did many other signs in the presence of (his) disciples that are not written in this book. But these are written that you may (come to) believe that Jesus is theMessiah, the Son of God, and that through this belief you may have lifein his name.
I’d really forgotten how much I love this passage until I read it again today. It reminds me that one of my favorite parts of our Mass comes from Scripture, as well as the basis for our Sacrament of Reconciliation. I can’t help but smile at Thomas’ doubt, turned to wonder and amazement, as well as complete acceptance at Jesus’ return.
Join in, link up, and have a wonderful week!