You are here: Home / Being Catholic / Saints and Scripture Sunday: Let’s Get Started!

I’ve always heard that if you want to learn more about something, volunteer to teach about the subject. My Catholic faith is incredibly important to me, although I haven’t the best example to my children as of late. One of my goals this year is to get to Mass more often, learn more about my faith, and share that with others.

How to go about that? (the sharing part?) Each week, I’ll be hosting Saints and Scripture Sunday: a virtual potpourri of my favorite scriptures, favorite saints, and favorite traditions of our Catholic Church. (For those of you who are sticklers for details, I use the Catholic Women’s Devotional Bible. ) 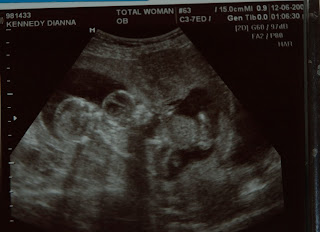 My tiny boys, lying together at 14 weeks gestation

The passage I’m sharing for today comes from Psalms:


For it was you who formed my inward parts; you knit me together in my mother’s womb.


I praise you, for I am fearfully and wonderfully made. Wonderful are your works; that I know very well.


My frame was not hidden from you, when I was made in secret, intricately woven in the depths of the earth.


Your eyes beheld my unformed substance.


In your book were written all the days that were formed for me, when none of them as yet existed,

For me, this is such a powerful passage. It calls to mind that before we are born, or even conceived, God knows us, and has plans for our lives. As a mother, it warms my heart that my children are protected by God, even before I am aware of their existence. As a woman, it’s a reminder that I am a vessel for God’s desires — both for myself, and my children.

This week, pro-life advocates around the country will be solemnly commemorating the momentous Roe v Wade decision, 37 years ago. This is a cause that’s always been near and dear to my heart, but I’ve never felt as called to participate, as I do now. In Washington, there will be the March for Life; with as many as 20,000 participants expected.

Here in Louisville, I’ll be participating in the Walk for Life: members of our parish, as well as others in the Archdiocese will be downtown on a prayer walk. I’ve never done anything like this before — I’m NERVOUS, as this is such an emotionally charged arena. I’ll be taking Abby along with me as well — you guys keep us in your thoughts and prayers.

In keeping with a pro-life theme this week, let’s put the spotlight on
St Gianna Beretta Molla. She was a wife, mother, and pediatrician in Italy during the 1950’s. During her 6th pregnancy, she developed a uterine fibroma, and was faced with an enormous decision. She could end her pregnancy with an abortion, have a complete hysterectomy (also ending the life of her child), or have surgery to only remove the fibroma. (risky to both her, and her unborn child. Gianna chose to have surgery to remove the fibroma, and told her family that her child’s life should come before her own. She had complications throughout her pregnancy, even after the removal of the fibroma. She delivered her daughter Gianna, but died a week later from complications. She was beatified by Pope John Paul II in 1994, and canonized in 2004, with her husband and daughter present for the ceremony. She’s the patron saint of mothers, physicians, and unborn children.

Want to join in? Choose a favorite passage, or favorite saint, and sign up using the MckLinky below. Look over on the right sidebar …. and grab the code for the button, displaying it with your post. No time to write a blog post? No problem … just leave me a quick comment. I’ll leave the MckLinky open for a week, and will be traveling to your blogs along the way, to learn from you, too!

Have a marvelous week!