You are here: Home / Being Catholic / A Beginner’s Guide to Head Covering… with Pictures!

I am so happy to be guest posting here at the Kennedy Adventures! Some of you, dear readers, may be readers of my blog Caffeinated Catholic Mama, while others of you are brand new to my caffeine-fueled rambling! I was very honored when Dianna asked me to guest post and it took me a bit of time to figure out what to write.

So Dianna and I were chatting on Twitter and she thought that it would be great to find out a little more about head covering in the Catholic Church.

OK, I’ll give you a minute to wipe the coffee off of your computer screen… Ready?

Yes, I cover my head at Mass and in Adoration… basically, if I am in prayer, I have my head covered. Now, since we are called to pray without ceasing, logic would follow that we (women) should have their heads covered at all times and some women do, especially among our Jewish sisters. Personally, I am still discerning if that is God’s Will for me. So head covering, what’s the deal?

Contrary to popular opinion, head covering in the Catholic Church did not get thrown out after Vatican II, it just was never addressed.

It’s kind of like if Congress, when adding amendments to the Bill of Rights never addressed the previous Rights, does that make the previous Rights null and void? No, so same thing with the Church. The topic of women’s head covering never came up during the council and therefore still applies. However, reporters of the time took it upon themselves to report that veiling was thrown out.

Some women cover their heads when in the presence of the Holy Father (Laura Bush and Michelle Obama have while Angela Merkel did not) and many Protestant Christian denominations cover their heads when in prayer (i.e. Quakers, Amish, Anabaptists, Mennonites, Presbyterian, Pentecostal) as well as some of our Jewish and Muslim sisters, so wouldn’t it apply that we could still cover our heads at Mass?

I first became interested in head covering when I was writing a post a few years back about Church Lady Hats. I grew up in a Black Baptist Church and one of my fondest memories about growing up were the fabulous hats the women would wear. Everyone would be dressed in their Sunday Best, shoes shined and hats on the head. It was when researching that post I stumbled on a few websites talking about women covering their heads in the Catholic Church. Not long after that, I bought my first chapel veil and the rest is history!

Besides being based in scripture, covering the head is a form of modesty with the thought that a woman’s hair is her crowning glory and by covering the head we are taking the attention from ourselves and focusing the attention back to God. Imagine yourself back in biblical times. If you were a woman of wealth, you most likely employed a few handmaidens who were able to braid and adorn your hair into the most elaborate of styles. If you were a poor woman, most likely you hair was not as adorned. How do we overcome this difference? Cover the head.

With all of that said, however, covering the head is an extremely personal decision and should be done because the bearer feels called to covering the head. Sometimes people cite Muslim women being forced to wear a burqa as reason not to cover the head; that covering the head is another attempt at the patriarchy to “put women in their place.” While some Muslim women are forced to wear the hijab or burqa, some Muslim women choose to wear the hijab or burqa. Whether it is because of a backlash against the current incarnation of somewhat militant feminism or just a desire for all things traditional and orthodox, some Catholic women are returning to the veil. These women see covering the head as a testament to their feminine nature and not as a burden placed upon them by man. They are embracing their feminine nature and not trying to disguise it.

I am not writing this post to convince you that you should be covering your head, but to give you some ideas of how to cover your head, if you have decided that you are being called to cover. This list is not exhaustive, but it is a good jumping point! Please bear with the pictures… photography is not my strong point!

Chapel Veil– Probably one of the first pictures people see in their head when they hear the word “Veil.” Traditionally, married women wear black while unmarried women wear white but beware of cultural norms. My married, best friend wore a black chapel veil in Japan and received some odd looks as black is reserved for mourning ONLY in Japan. 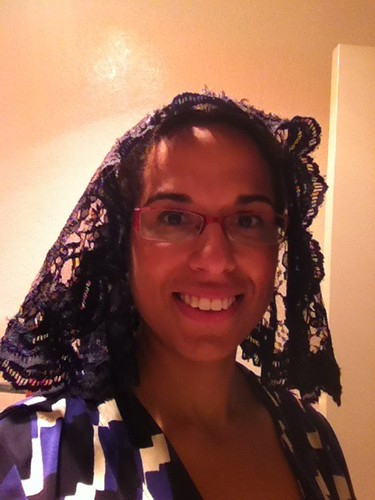 Mantilla– the second type of “veil” most people imagine. Typically longer than a Chapel Veil and bit more on the “romantic” side. The Mantilla is more popular among women in Spain and of Spanish influence and is sometimes accompanied by a high comb on the head. 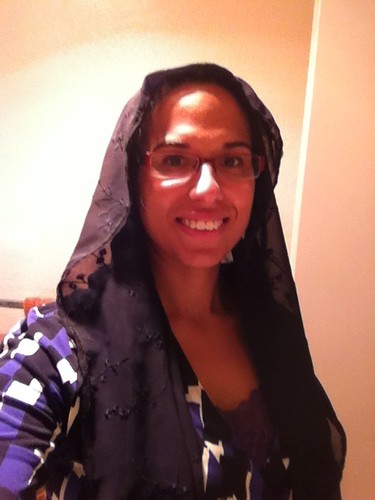 Mantilla with ends worn down, draped over my shoulders a bit. 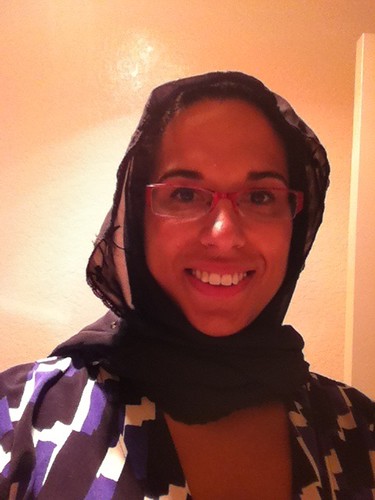 Mantilla worn with ends wrapped around the neck.

Scarf/ Pashmina– I have found a long scarf or pashmina to be one of the most versatile items in my wardrobe. It can cover a kind-of-low neckline, can be used as an impromptu nursing cover, can be fashioned into a baby sling and can be used as a head covering! 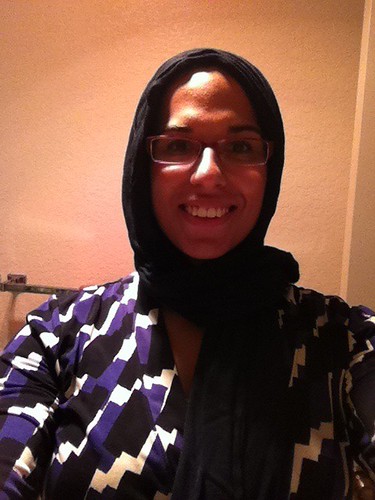 Here I have the ends of the scarf just draped around my neck ala 60s movie star. 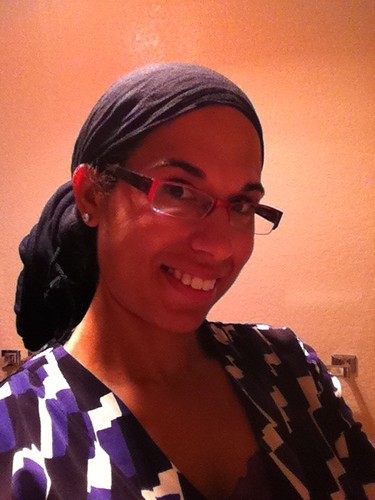 Here, the ends of the scarf are wound around my bun and pinned into place. This is one of the reason I love my pashminas!

Bandana– This covering came from non-Catholic head covering mama friend of mine who writes over at Retro Modern Mom. You can take a bandana and fold it into a headband. 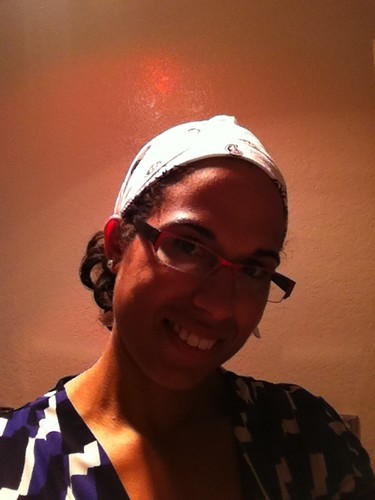 When you would like to cover your head, just tug the tail of the headband and pull the bandana over the back of your hair. 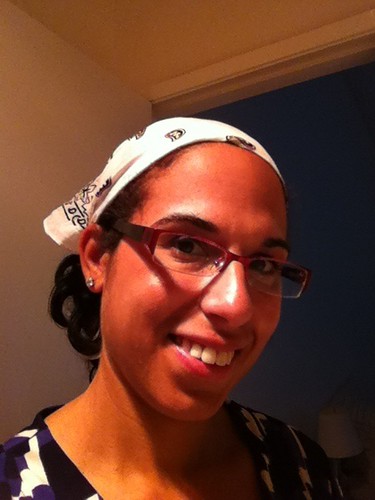 Hat– Quite possibly the easiest way to cover one’s head. Just about any hat would work, keeping in mind the reason and location of your head covering. This may cause your hat to err on the side of being more dressy rather than casual! Other great hat options could be a cloche, or beret. 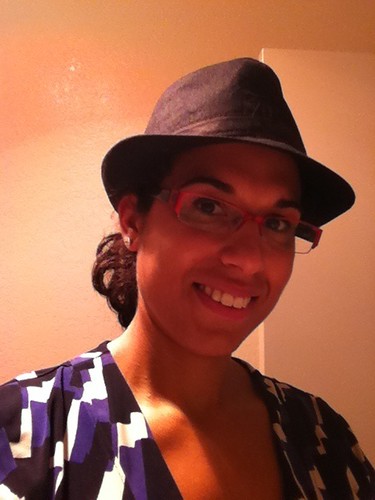